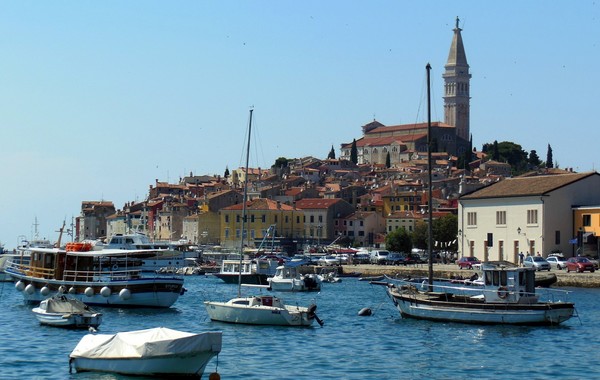 The city of Krk

was already mentioned by the blind Greek Homer in his famous poem under the name of Koureto, and many researchers connect this name with the inhabitants of the island of Krk. The city is dominated by the cathedral complex, although it is not located on a hill.

Krk’s cathedral is, along with the Frankopan family castle, the most famous city motif. In the 5th century the basilica, from the early Christian period, was situated on the location of the Roman thermae. During the following years, the cathedral experienced a variety of styles: romanic, gothic, renaissance, baroque and modern style.

It was mentioned for the first time in written documents in 1186, and was dedicated to the Assumption of Mary.
The castle was built gradually from a number of elements. Today it is a square building, 27 m long and 17 m wide, whilst the height of its perimeter walls is 9 m. On the northern part, towards the Kamplin the circle tower is situated. On the western corner is the square Frankopan courtroom, on the eastern part, towards the sea, is the square tower, and on the western side is the observatory.

In fact, Christianity came into the city in an early period, which is proved by the Iliric epitaphs. The old city centre is reachable through the four doors, and out of the city walls, the city was only developed more intensely over the last few centuries. The city walls with their doors had already been erected in the pre Roman period and have remained in the same place until today, even though they have been reconstructed many times, they have always established the interior city arrangement.

We can already see traces of catering from the early Middle Ages in the city of Krk, and its first guests were Czechs. From that period until today Krk has become, with the number of its hotels and camp-sites, a very strong centre even at wider European levels.

The city of Krk is today the administrative, political, economic and religious centre of the island of Krk.